To Spain and back 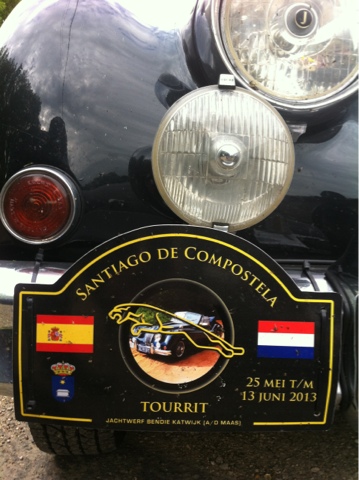 Today the conversation was of routes.

A newly dedicated pilgrims route to Santiago de Compostela from North Western Europe. Via Paris, along the Seine, river Yonne and Sens. Not exactly direct but got the thumbs up and broad smiles from the cafe owner and a group of pilgrims returning to Holland from Santiago in their vintage Jaguars.

When I tell people of my journey, they nod wisely about the GR2, the long distance east to west path. Switzerland, Suisse yes, yes, no problem. But why are you  going to Dijon? Followed by a mime of a lump and more wise noddings.
There are several interlocking graphs of compromise in this pilgrimage thing. The direct route. Noise, fumes, endless lorries versus country roads, river banks and lanes is one. Cost and personal autonomy: hotel Ibis vs small village gites is another. Internet connection, wifi available, another? And possibly style? Solitary walker; sprightly, shorts, chunky boots, mini rucksack, weather shielded map ready to go on one end of the scale and this group of five course bon vivants on the other.

Chaucer (plus Powell&Pressburger and Pasolini) were so accurate in their descriptions. Timeless. A cockerel crowing in the next field says it is time to leave.
Posted by Jonathan Swain at 10:26